The first meaning of the English word “rogue” is what in Spanish we could call a canalla. The truth is that I didn’t know this Anglo-Saxon term until I read a post by Wendy Blackburn in which she used this headline to refer to the new generation of advertisers and agencies that are already playing a key role in the digital economy and marketing world.

Delving into the etymology of “rogue”, I found two meanings in the Cambridge Online Dictionary that explain the title of Blackburn’s post, and that I unabashedly copied for the title of this blog post:

“Behaving in an unexpected or abnormal manner, often in a way that ends up causing harm”

“A person who behaves badly but … is still well liked!”

Thus, I am commandeering the term “rogue agency” for all that it evokes and because I really think that the Advertising sector, in all of its different forms, is undergoing an exciting disruptive transformation that, in general terms, has caught off guard the traditional agencies integrated into  communication behemoths; that is, publicly traded companies.

These are new, independent agencies capable of understanding how to deal with a market shaped by online conversations to build brands, and they have unexpectedly burst into an industry that was losing much of its appeal: the essence of advertising and branding, its forms and styles (Oh, to return to the heady days depicted in Mad Men!) as an orientation was embraced across entire organizations towards pure EBITDA. Communication groups or financial groups?

The interesting thing is to see how this new phenomenon is managing to – and this is no small feat – meet a need that today’s advertisers are already openly manifesting: the digital transformation of their companies also involves an overhaul of their communication policies and, in particular, of a way of branding that provides their consumers with distinctive value through dialogue and interaction with the brand. These customers, or audiences, are no longer passive subjects fed advertising. Rather, they are empowered by technology, spurn intrusive messages (GRPs galore in 1.0 media, banners, interstitials and other unpleasant and directly ignored digital distractions). They are consumers who want to be part of the experience of the brands with which they interact. And they don’t just want this. They get it. Featuring a kind of hybrid profile, because they are not only target groups, but also agents in the development of brands, they create messages and transmit them to their peers, groups and communities. Let’s not forget that word of mouth doubles the value of traditional advertising, and also makes it more credible. These users are impatient, want everything now, and are permanently connected.

Let’s go back to the meanings of the term “rogue”, because we have only covered one, that suggesting unexpected behavior or emergence. We also mentioned that a rogue individual or entity ends up doing damage to its environment, in this case the Establishment, and that despite this bad behavior … is liked anyway.

The Spanish publicist Risto Mejide, in his book #annoyomics, Annoyomics: El arte de molestar para ganar dinero (The Art of Annoyance to Make Money), states in one section that annoyance really gives us pleasure. Design thinking expert Tim Leberecht, with his The Business Romantic theory, argues that a romantic brand should make us suffer… a little bit, offering up an indisputable example: IKEA. Leberecht also states that the experience of the unexpected enhances even further the halo of romanticism in this paradigmatic and singular approach to branding.

Chris Jones, managing partner at the independent agency Forever Beta, with offices in NYC and London, stated the following in a recent article in our industry magazine Advertising Age:

“A new generation of clients/advertisers know that they no longer need agencies with 180 offices around the world and a team of 50 people assigned to their account or project to feel secure.”

The advertiser of the future has to face new challenges involving speed and agility in communicating with their audiences, as there will be demand for advertising agencies capable of understanding and adapting to today’s world; agencies with leaner structures and that are, creatively and strategically, more agile, and equipped with multi-disciplinary teams and professionals (goodbye to watertight departments) capable of providing support and delivering effective solutions to continuous brand and business challenges.

Trust in these advertisers in the future will be earned by responsive agency teams with a very high capacity to generate rapid solutions through hybrid knowledge and technology management.

This vision, far from being a fantasy or a pipe dream, has actually been a reality for some time now. In Spain we have the example of agencies such as Good Rebels and Social Noise. In other countries there is WeAreSocial and Droga5 – the latter the creator of the social branding campaign “I Will What I Want” for Under Armor, which last year garnered it the Cyber Grand Prix at the Cannes Festival. Two keys to this award-winning action were Gisele Bündchen and the wisdom of the crowds participating and co-creating the campaign collaboratively.

There are also agencies of this type with admirable visions and track records that came about as independents and are now part of large corporations. This is the case of AKQA and its mantra “The Best Advertising Is Not Advertising”, and MRY, the former Mr. Youth. These are agencies that I follow very closely and whose philosophy and work inspire me on a daily basis.

In short, we are living during exciting times of change, of digital Darwinism, which has already profoundly transformed major industries such as Music, Photography, Entertainment, Information and Accommodations, to name but a few.

What will happen to the Advertising industry? Well, perhaps it’s time to contribute to its redefinition as active agents of that change. As Chris Jones says in his Advertising Age article: “Doing things a certain way because that’s the way it’s been done all your life may be the riskiest strategy of all.” 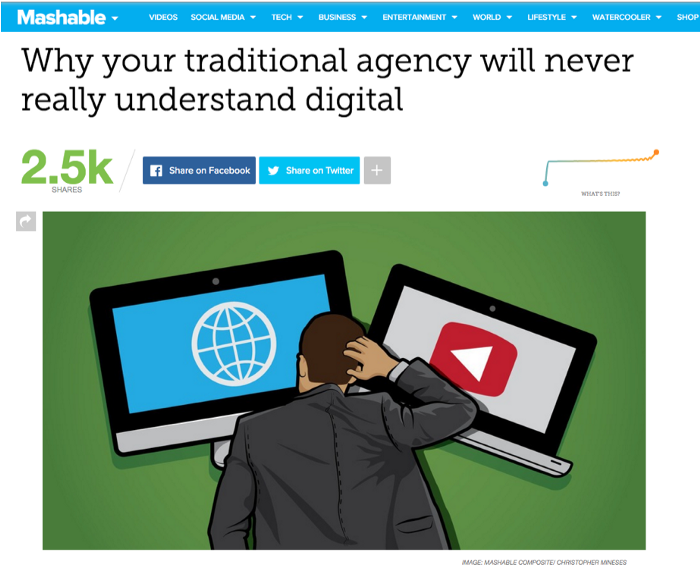 I’m all for being and building a rogue agency. It’s cool!