Physicians and the Pharmaceutical Industry: Going Forward, What Will Their Relationship Be Like?

From the traditional logic of interruption, to calls for a “self-service”😳 format thanks to digital technology

The dramatic impact of the global health crisis caused by the COVID19 pandemic is shaking the very foundations of every economic sector, in some even testing their ability to survive, in those like Tourism, Hospitality, Commerce, Cars, Culture, etc.

In the mid-20th century the Austrian economist and surgeon Joseph Schumpeter popularized the term “Creative Destruction,” denoting the process of industrial mutation that incessantly revolutionizes the economic structure from within, constantly destroying the old, ceaselessly creating a new one. The pandemic has stimulated this process, accelerating the need to transform business models. Because now, it is do or die. 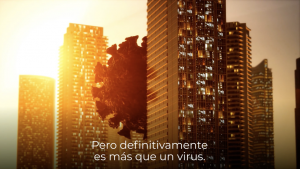 Today’s scenario is one of outright Darwinism: the species that survive are not necessarily the strongest, or even the most intelligent, but those that are most adaptive to change.

Innovate or disappear. It’s that simple. And this must be done quickly, embracing risk, learning from mistakes, iterating … and without any room for procrastination.

The pharmaceutical industry has traditionally based its business strategy on its sales forces. It is true that in the last 10 years, in the wake of the recovery from the devastating financial crisis of 2008/2009, and with the rise of digital media, many companies in this sector began to test and implement an alternative remote medical consultation model, but never as a mainstream format. It is also true that more and more health professionals complained about commercial pressure exerted by laboratories, demanding another type of less intrusive relationship. What is undeniable is that the two parties must understand each other, interact, cooperate and communicate, since they are both key actors in the healthcare value chain.

The pandemic accelerates the change in format

As you know, Sermo is the leading, best-known social network for doctors. Founded in 2005 by Dr Daniel Palestrant, it is currently made up of 1.3 million physicians from 150 countries.

In the context of the pandemic, in 2020 they carried out the HCP Sentiment study in five waves/parts, with a sample of 1,800 doctors in 10 specialties in 8 countries, including Spain. 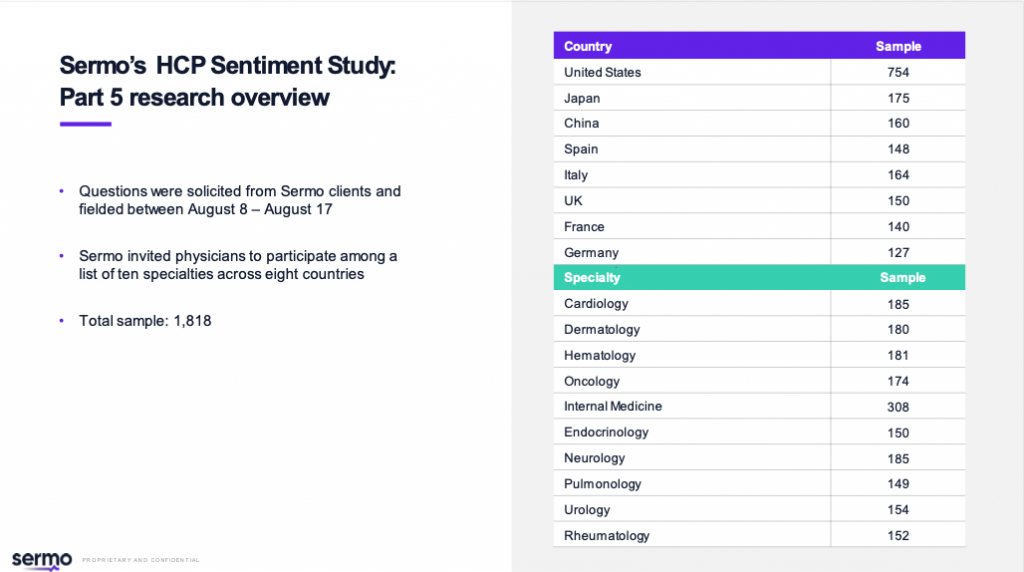 The study addresses, among other topics, the degree to which telemedicine has been embraced by doctors, their perceptions of it before, during and after the pandemic, and also the change that doctors have experienced in their relationship with the pharmaceutical industry through its representatives.

On this last point I present a summary of what I consider the key lessons learned: 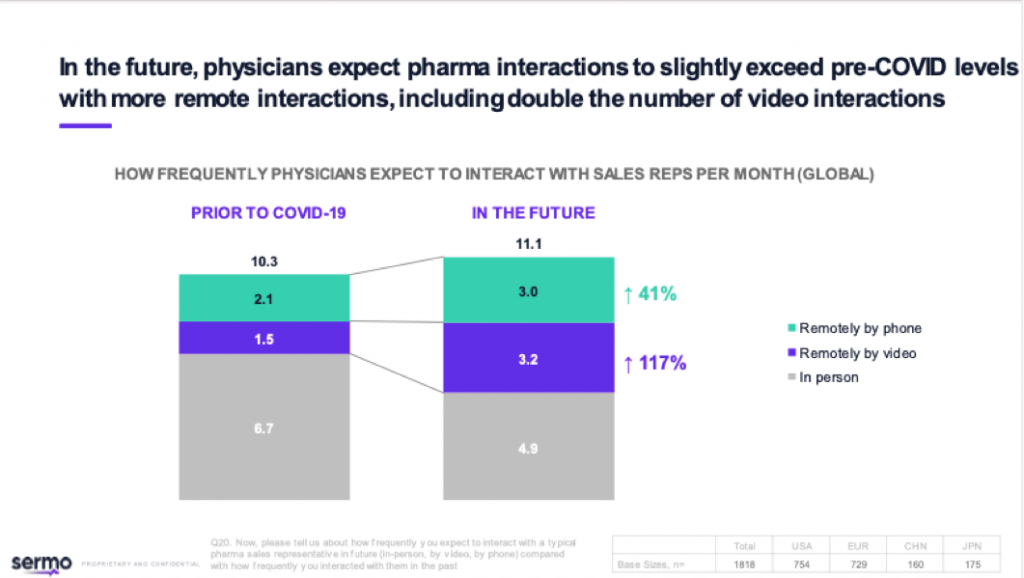 Sermo conducted a COVID19 barometer from January 8-13, 2021, asking a sample of 280 Spanish doctors whether they believed that after the total vaccination of the population there would be a return to “normality”. 64% said “no”, or that they were not sure. This perception applies to everything, including their relationships with the pharmaceutical industry.

Intouch Group and the DHC recently published a report: The Now and Next in Pharma Marketing, in order to shed light on the challenges and changes the pharmaceutical industry faces in this new pandemic economy.

In this report, they astutely categorized laboratories based on their attitudes and behaviors in terms of accelerating the adoption of digital technology to cultivate relationships with physicians, as follows:

1) Those who are waiting to see what their competitors are doing, or those who have gone into “paralysis mode”, hoping that things will go back to the way they were before

2) Pioneering pharmaceutical companies – early adopters – in the rapid adoption of digital technology, but with a purely tactical and reactive vision of this adoption

3) Pharmaceutical companies that are pioneers in the adoption of technologies, having realized that the pandemic actually represents a great opportunity to strategically transform and reinvent the sector. These are the true agents of change, as they have the vision, the mindset, and they are acting fast, without a fear of risk, and assuming that errors and mistakes are nothing more than learning opportunities that facilitate more effective action. That’s easier said than done, right? I don’t think so, and I also believe that this is the strategy offering the greatest gains and returns in the medium and long term.

From interruption to invitation in self-service mode

The relationships between pharmaceutical companies and doctors will evolve from the traditional face-to-face model to a hybrid (face-to-face/digital) one in which they will be the ones who, in a self-service format, decide on the points and times for contact with the industry. In fact, the idea is for to be the doctors themselves who initiate the interaction, either with representatives or MSLs.

All this also necessarily involves training (in vision and technology) and helping sales representatives to become proficient in this new remote format, and advocates for it.

An example of this way of cultivating the relationship with doctors is that of Veeva Systems, which at the end of October 2020 launched MyVeeva for Doctors, a mobile application to facilitate physicians’ access to the pharmaceutical industry.

Thanks to this app, it is healthcare professionals who, through a “click to chat”, initiate the interaction with the pharmaceutical company’s representative or MSL. In this way, it is the doctors who take the initative.

In this same digital sphere, doctors can find all the information they need from the laboratory: products, indications, action mechanisms, efficacy and safety data, studies, scientific literature, patient resources, links to their websites and profiles on social media, etc.

The first companies to adopt this remote interaction app with doctors were Boehringer Ingelheim, Pfizer, GSK, Sanofi and Sobi.

Social media, also at the service of engagement with doctors

One year ago my friend Alexandra Fulford reflected, on the Ideagoras blog, in her post “Pharma Social Media – Then and Now” on the adoption of this discipline in the pharmaceutical industry around the world:

Too many pharmaceutical companies still use social media as one more public relations instrument in order to publicize their institutional and CSR activities instead of using them as powerful participation and engagement tools.

Professionally and personally, I can’t agree with her more. In some cases, the focus has been lost – if there ever was one – on the great value of this resource, with the loss of opportunity for the industry that this entails.

Perhaps it is time to reconsider our approach to social media, considering the great potential and promise with which the networks were created:

In short: don’t talk so much about yourself as a company, add value, and allow members of your community to give you the credit you deserve and become advocates for your pharmaceutical company. Then you will be more credible, and forge and strengthen professional and emotional ties with your clients in the digital sphere. You will be unique, and much more authentic.

These are times of radical change, transformation and reinvention in every sector. You’re better off being an active agent of change rather than a mere observer; this will also really set you apart.