On January 2, 2009, Ideagoras was officially established. At inception, the company was a concept driven by a purpose: changing the way to build brands managing and introducing them — in a human way — into the new markets of conversations.

The idea was to facilitate the connection of a brand with stakeholders by grouping them into digital ecosystems; a new kind of public square so where relevant conversations and experiences could happen. The brand is co-created with authentic interactions and storytelling of all the conversationalists. We called it the collaborative branding aimed to ignite word of mouth and consumer advocation. The audiences were no longer passive and could become into digital evangelists and activists of our brands.

In the healthcare and pharmaceutical sectors, where we initially focused our efforts, this was -and still is- a disruptive approach.

Back in 2009, this way of branding was different from the top-down driven marketing that had been the norm, so was perceived as dangerous and risky: barriers, fears to the unknown, legislation, were just some of the concerns.

On top of the unknowns, we were also facing the horrible consequences of the 2008 financial crisis, the worst since the Great Depression of the 1930´s. Hidden in plain sight, was the opportunity for radical changes to business models through welcoming and embracing the newly created digital economy. Behind this long sustained uncertainty were facts, figures and human tragedies (such as the enormous unemployment rates). There was also the Joseph Schumpeter principle of Creative Destruction because of the digitalization of everything within markets. We were living the Darwinian theory of evolution: innovate and adapt to the new territory so you can survive and compete…or simply die.

The good news is that the 4th Industrial Revolution could be an opportunity for those of us living through it, by being active change makers rather than simple spectators, unlike previous times. But for becoming agents of change there was the imperative need of reinvent ourselves to understand the values and great opportunities that could lead us into giving shape to new ideas and services. Easy said than done!

Change can be challenging. As stated by the famous and legendary 1997 Apple Think Different TV commercial

Here’s to the crazy ones. The misfits. The rebels. The trouble-makers. The round pegs in the square holes. The ones who see things differently. They’re not fond of rules, and they have no respect for the status-quo. You can quote them, disagree with them, glorify, or vilify them. But the only thing you can’t do is ignore them. Because they change things. They push the human race forward. And while some may see them as the crazy ones, we see genius. Because the people who are crazy enough to think they can change the world, are the ones who do.

It was the aspiration for Ideagoras to change the world to become a more egalitarian place, where more voices would be heard! New digital media enabled branding in different way within a traditionally top-down, broadcast-focused sector. Why not challenge the establishment?

The first two years were building a solid basement and deep roots of vision and knowledge. We cultivated our image, nurtured a new and real social environment…and enjoyed freedom! We were kind a solo company with almost no business and projects to manage. Being patient was not one of my strong suits but I learned to wait for the market to catch up. At that time, I heard about the bamboo analogy of being an entrepreneur: Lying dormant for the first years, with no sign of life, the bamboo seed finally sprouts at beginning of the 5th year, when growth rapidly takes on an exponential rate. What really happens with this tree, is that it takes all of its nutrients and grows it’s roots — because some very, very strong roots are needed in order to support an 80-foot tree.

According to an article published in Forbes, 90% of the startups fail. And this is regardless if they are venture backed or not. We opted for avoid any kind of outside funding and bootstrapped our journey. Again, easy said than done. Risky, scary…but amazing!

Ideagoras reached the breakeven point in the third year of operations. In 2011, at a stage when Spain was in the was in the middle of the economic recession, Ideagoras took off financially.

Local and international clients hired us and trusted us. Together we built a new category of services, of social media marketing in the healthcare sector, betting on unprecedented and unexplored ideas to tap into branding. We generated emotional bonds with newly empowered audiences in the digital economy. These clients were brave pioneers and early adopters who saw the future. I’m grateful to all them and acknowledge their risk-taking and positive contributions. They clearly understood that in the Social Web era everything is about collaboration. And collaboration means as well reciprocity, motivation, and respect between everyone involved in a project. We were all connected by the idea of doing things differently. 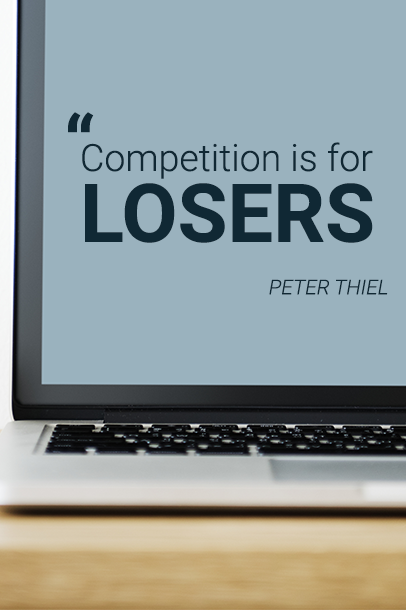 Of course there were and are many other agencies and actors in the communication sector innovating, tackling barriers, and being passionate about the idea of changing things and bringing into life amazing projects. We all are the crazy ones, but I would rather not consider other agencies competitors. I was on my journey and they were on their own journey. Full stop. As Peter Thiel says, competition is for losers

I preferred to spend my time learning, getting inspired by the unexpected, being curious about what is being done in other sectors, and keep dreaming. To be honest, spent very little time analyzing the competition. Actually, I don´t know who my competitors are.

But everyday is Day One. Evolution is a must. Darwin´s theory is always there reminding everyone that we must keep up with the changes. The idea of living in permanent beta has driven each day of the past ten years of Ideagoras. At the same time we had to manage growth: the vision, the procedures and methodologies, the services, the Ideagoras team members that have joined the project to make it real and magical, the partners, the clients, the non stop curation of our image by practicing what we preach, our friends around this so flat world, the way of dealing with opportunities and failures, the insatiable need of learning and discovering, etc.

I learnt at a ESADE — Singularity University program I attended early in 2018 the term Infinite Learning Operating System. And I love it!

10 years of continuous learning and constant evolution, because there are no stable companies that guarantee positions of permanence and predominance in any market, much less in today’s context of accelerated and global change. A VUCA context: volatile, uncertain, complex and ambiguous economic environment where everything is being transformed. This dynamic of disruptive changes has only just begun. The best is yet to come.

Thinking about our next decade, honestly I am not capable of specifying in black and white how our business model is going to be. And I don´t mind. All I know, for sure, is that this will be a radical different company operating in the marketing sector and driven by this vision: Exponential Human Branding.

As Ray Kurzwail states: The Singularity is Near. And is being dated 2029 the year on which Artificial Intelligence will reach the same level of consciousness than Humans. And other emerging Exponential Technologies are now speeding up this hectic rhythm of change: Blockchain, Synthetic Biology, Virtual Reality, Augmented Reality, Internet of Things, Voice Interfaces, 3D Printing, Autonomous Vehicles, Sensors, Connectors, Quantum Computing, etc.

All these technologies are going to converge, disrupt and transform any business model in a dizzy and crazy path.

As my friend and business partner Chia Hwu says: the big tech companies fostering those amazing technological advances can jeopardize, on their way to Singularity, the human sense and purpose in business. As human beings, we can´t be perceived and treated just like data providers, like individual surpassed by machines and therefore inferior to them, like just a line of a code or like people vulnerable to their algorithms. Humanity has to come first, it has to be the focus of all we do in whatever sector. And of course, in all related with branding and marketing.

If companies and brands want to engage to audiences empowered with their own artificial intelligence…they will have to deal with it making the difference on how they approach us. And the difference lays in individual, precise and human branding.

Hope to be around here in January 2029 to write and share with you the zeitgeist of the next ten years to come of Ideagoras.

My sincere gratitude to all those contributing to make a dream come true…and to those challenging us each day to keep dreaming with the same enthusiasm the kids do.